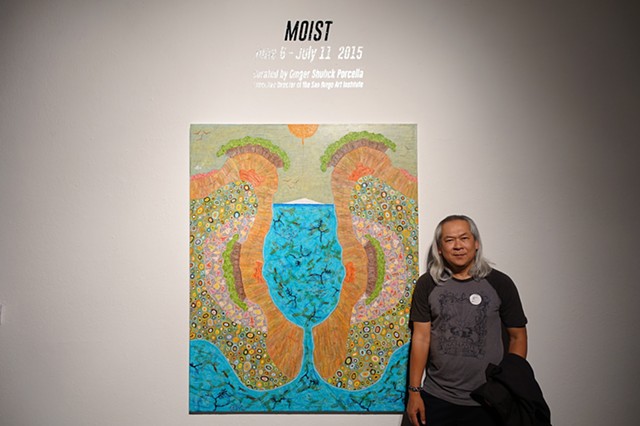 Experience the sensual opening night performance exploit, "Obsession". Live out an obsessive night of music, art and Bacchanalian pleasures. Pacific Symphony musicians mix it up with DJs and video art at OCCCA’s “Moist” exhibit for a night of intense visual, emotional and aural stimulation during the Downtown Santa Ana Art Walk.

When I select work for a juried show, I try to be as diverse as possible in my selections—both in medium and content. It is perhaps more difficult to select work for a “themed” juried show as opposed to a general juried show, the latter of which tends to serve more as an overview to trends in contemporary art. Thus, I wanted my selections to be as cohesive as possible in adhering to the “Moist” theme. When I curate shows, I always start with a project in mind and select work that explores that project in great detail. However, this was the exact opposite—working backwards with the given work to try to present a curated and deliberate-looking exhibition. However, I did not want to make the “obvious” choices; I was actually surprised at how heavy-handed and literal some artists took the theme of “Moist”. It’s not that I’m prudish but I wanted to ensure that the exhibition was accessible to audiences of all ages and backgrounds, and was sophisticated without being vulgar and offensive. For example, it was interesting how many artworks were submitted of female forms, bereft of a head, completely objectifying women into an anonymous sex object. I was particularly surprised at the number of submissions falling into this category, as the interview that I did with the Orange County Center for Contemporary Art to publicize the exhibition was largely about my being a feminist. As such, all the figurative works I chose depicted complete figures with faces, to humanize and normalize our sexuality. It was also important for me to select work that was representative of all media—craft, video, installation, painting, sculpture. I wanted the exhibition to have a mix of both technically-skilled and content-driven work. However, art is completely subjective and as such, there were many fantastic pieces that did not get in, while I’m sure there were some pieces I chose that will leave people questioning. It’s sometimes a good thing to leave people with more questions than answers.

Ginger Shulick Porcella is an arts administrator and curator whom recently relocated from New York City to San Diego to join the San Diego Art Institute as its Executive Director. Porcella is the founder of Big Deal Arts, and previously served as the Executive Director of Art Connects New York, the Managing Director of Flux Factory, and the Director of Grants and Community Development at Staten Island Arts. As an independent curator, Porcella largely focuses on new media projects that expand the dialogue around the intersection of art, architecture, and anthropology. Porcella is an Associate Curator with Artist Pension Trust (APT Global) and has curated exhibitions for galleries and museums across the U.S. including; “LUMEN”, an international video and performance art festival (Founder and Head Curator 2010 and 2011); “Ivory Tower”, a video exhibition concurrent with Art Basel Miami Beach 2011; “The Typhoon Continues and So Do You” at Flux Factory; “The Sixth Sense and Other Myths” at NYC Industries for the Blind; the critically-acclaimed “Future/Past” at REVERSE Gallery in NYC; and most recently “Beyond Limits: Postglobal Mediations” at SDAI. Porcella’s exhibitions have been positively reviewed in The New York Times and USA Today, and her work has been featured in Hyperallergic, creem magazine, and Modern Painters. Porcella holds an M.A. in Socio-Cultural Anthropology from Columbia University and a B.A. in Art History from DePaul University.